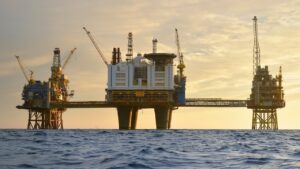 The draining strategy is based on pressure, maintained using water-injection or water-alternating gas. The recovery factor varies from structure to structure, from 16-44% – with an average of 34%. Recoverable reserves have been estimated at 53.3 million m³ of oil and 11.4 billion m³ of gas. Most of the Oseberg Sør wells will be drilled from facilities on the Oseberg Sør platform, however, some of the outlying structures will be drilled from two subsea templates.

These were installed in early 2000 and will be tied in to the installation using infield pipelines. The well plan envisages 30 wells in the main reservoir, as well as another three in the Usira structure. These break down into 16 production wells, 14 injection wells and three water-production wells. The main reserves lie in the Brent Group (Middle Jurassic section), but discoveries have also been made in the Heather and Draupne formations (Upper Jurassic).

Ten potential reservoir structures lie within the area and seven of these were incorporated into the basic operations plan. Part of the Omega Nord structure can be reached from the Oseberg field centre and will be produced and metered from there. The development concept for Oseberg Sør is an installation with living quarters, a drilling module and the partial processing with a first-stage separation of oil and gas.

It is supported by a lattice steel-jacket substructure. The platform deck has been built as an integrated structure, as far as the offshore lifting capacity allows. The platform has design production capacities of 4,900m³/day oil and 13,000m³/day of water, with the fiscal metering of the oil. It is also designed to accommodate gas production of 3.8 million m³/day, to carry out water injection at 41,500m³/day and gas injection at 38 million m³/day. Partly stabilised oil will be transported in a 12in pipeline for further processing at the Oseberg field centre and export through the Oseberg Transportation System to Sture. Associated gas will be injected into the Oseberg Sør reservoir.

The fabrication was carried out under an engineering, procurement and construction (EPC) contract for the topsides and jacket, as well as the offshore hook-up. The topsides were fabricated by Aker Stord in a NOK2.7 billion contract. The 13,200t topsides include an accommodation module that can accomodate 100 people. The drill package is 20% smaller than a standard unit. It is designed to operate over a 32-slot well pattern. T

his comprises a skid-base assembly, a substructure with four main levels and a drilling rig. Horizontal and vertical pipe handling is remotely controlled from an enclosed drilling control room (DCR), using three 20in monitors. The 124m-tall steel jacket, costing around NOK300 million, was fabricated in the Aker Verdal yard.