The Kizomba A field development, include the Hungo and the Chocalho fields. The total recoverable resources of about 1 billion barrels of oil (gross), and began producing more than 130,000 barrels of oil a day in August 2005. Kizomba A, in water 3,300 to 4,200 feet deep represents an investment of nearly $3.5 billion. 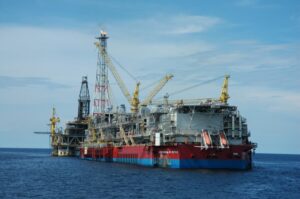 Kizomba A consists of three main components. The drilling center is a tension leg platform (TLP) that includes a rig and 36 slots for drilling the project’s oil and gas wells. Moored nearby is a floating production, storage and offloading (FPSO) vessel designed to take all of the oil produced from the platform, process it and store it until the oil can be offloaded onto waiting tankers. The third main component of Kizomba A is a series of 26 sub sea wells.

All of the sub sea wells are injectors. Kizomba B develops the Kissanje and Dikanza discoveries in water depths of 3,300-3,400 feet. The $3 billion Kizomba B project in Angola’s Block 15 is expected to recover nearly 1 billion barrels of oil at a target production rate of 250,000 barrels per day.

The project includes the combination of a surface wellhead platform and subsea wells tied back to a Floating Production, Storage, and Offloading (FPSO) vessel. The FPSO will have 2.2 million-barrel storage capacity. First oil is expected by early 2006. The project anticipated to go into production in 2006, will develop the Mondo, Saxi and Batuque oil fields. It will employ the same three component development techniques of its predecessors, Kizomba A and B, consisting of a TLP, an FPSO and subsea wells.